The Heart of Gold sailing team is an accomplished crew with a storied history of winning numerous regattas and races in the San Francisco Bay for the past 20 years. Having been featured multiple times in sailing magazine Latitude 38, the Heart of Gold crew is racing this season for the first time with sponsorship by Taiwan, the Heart of Asia. This year, Taiwan is celebrating the “Year of the Bay,” a celebration of all that is maritime: pristine coastlines, stunning islands, bay recreation, and the beauty of the ocean itself. 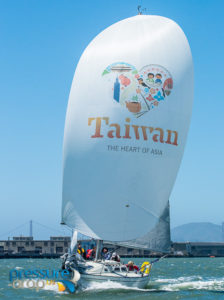 Members of the Most Beautiful Bays in the World are committed to saving the natural heritage of the bays they represent, preserving their identities, and respecting the way of life, traditions, and economic interests of those who inhabit the areas. These bays join together to promote their respective areas and encourage the exchange of experience, knowledge and expertise. This September and October, Taiwan will host the Most Beautiful Bays in the World Club’s annual meeting in Penghu.

The Heart of Gold team is competing in dozens of races all across the Bay Area throughout its 2018 season, including the highly anticipated all-women’s Red Bra Regatta on October 20. For more information about traveling to Taiwan and the Year of Bay Tourism, go to https://eng.taiwan.net.tw/

This site uses Akismet to reduce spam. Learn how your comment data is processed.