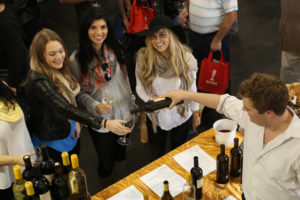 On February 17, the San Francisco Chronicle Wine Competition celebrates its 18-year anniversary as the largest competition of American wines in the world. At Fort Mason Center in San Francisco, wine enthusiasts will enjoy sampling award winning wines from all across the country.

Year after year, the San Francisco Chronicle Wine Competition (SFCWC) grows more competitive and more prestigious, drawing a huge number of entries from some of the finest wineries across the nation. SFCWC award-winners, especially the Sweepstakes and Best of Class awards, are widely regarded as among the best wines in America. Due to the SFCWC’s size and the expertise of the judging panel, this competition is often considered the ultimate barometer for wine consumers to select and measure wine.

The public tasting event draws wine lovers who come to the tasting with very educated palates. At the event, guests come together to learn even more about wines, while gourmet food purveyors offer delectable food samples that pair perfectly with the award winning selections. The public tasting—traditionally a sellout event—also features KGO Radio show hosts, writers from the San Francisco Chronicle, and notable wine industry leaders.

The San Francisco Chronicle Wine Competition kicked off this year with the judging, which took place from January 9-12 at the Cloverdale Citrus Fairgrounds. 67 elite wine judges from all areas of the wine industry, including media, trade, education, retail and restaurant/hospitality, gathered to participate in the blind judging. Wines were categorized by varietal and price range, evaluated, and then select winners were invited to participate in the Public Tasting event.

Over the past decade, the number of wine entries submitted to the SFCWC has grown rapidly. In 2018, the competition had an astounding 6,960 entries from 35 states, illustrating the steady demand for a variety of options among wine consumers and firmly establishing the event’s prestige as an esteemed wine competition.

To buy tickets, go to: http://winejudging.com/public-tasting/