The 2017 Northern California Renaissance Faire was our most successful faire ever. Families and friends from all over California (and across the nation!) flocked to the Faire to enjoy the weekend in an immersive fantasy village.

Much of this increase in attendance can be attributed to PR Magic’s innovative digital campaign strategies. As the media landscape changes to focus less on traditional television, print, and radio and more on new digital options, we are adapting our tactics and our messaging to reach more consumers than ever before.

For this year’s Northern California Renaissance Campaign, we advertised heavily through social media outlets. Facebook remains one of our strongest campaigns, and this year was no exception—it performed incredibly well. To illustrate, our page had 73,837 fans on 9/12, and 86,492 as of 10/23. This is a massive difference of 12,655 fans in just over a month; a 17% increase!

Another new element was our Social Connect Billboard Campaign. PR Magic was the first firm in the Bay Area to use this feature with our billboard partners, Clear Channel Outdoor. One of our digital billboards—on Hwy 101 near Ralston Ave in Belmont—was used in an interactive campaign that synced up with our Twitter page. Ren Faire attendees could tweet their photos with the hashtag #2017RenFaireBillboard for a chance to win their faire photo on the billboard. This gathered attention because people were encouraged to take selfies in costume at the Faire, share it online, and then the winners could even retweet the photo of the billboard that had their photo on it live. 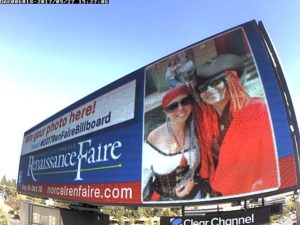 The Twitter ad campaign itself performed fantastically as well. Garnering well over half a million impressions throughout its month-and-a-half run, the promoted ads resulted in 29,807 link clicks of people going to our NorCalRenFaire website.

Google Adwords also continued to help direct people to our website. With 125,000 impressions and 28,200 clicks, these ads pointed people looking for events, fairs, festivals and more to our website. Interestingly, we gathered the most clicks from mobile users: 78.8% of clicks were from mobile, while 16.8% were on the computer and 4.4% from tablets.

In addition to these digital campaigns, we also worked with various print, radio, and online media outlets to take advantage of the mobile advertising campaigns that they offered. These campaigns included things like display ads targeted toward our key demographics, keyword contextual, category contextual, mobile retargeting, and geofencing specific locations and events (like Comic Cons, for example).

With the largest portion of our Faire audience coming from tech-savvy Silicon Valley, these various digital strategies resulted in record-breaking engagement and ultimately the highest attendance numbers the Ren Faire has seen to date. Combined with strong campaigns in other forms of media, this created a well-rounded advertising landscape that brought more eyes to our site than ever before!

Here’s to an even more record-shattering 2018 season! #Huzzah